Cyclists supporting cyclists…and another way of being

It can be a lonely road. I don’t think anyone else is cycling to Bhutan. In fact, there aren’t that many people cycling at all around here. People pass by in cars and occasionally give me and toot on their horn, and maybe some words of encouragement too. Others may smile and wave from the side of the road.

But every now and then I catch sight of the familiar silhouette of a touring cyclist ambling towards me (almost always going the other way) and my heart will jump for joy. Almost without fail in this part of the world when two touring cyclists cross paths there will be a stop and some exchange of words.

So much to say

At times it seems like there are a million things to want to say. But a million things that need to be heard too. It can be exciting. At times, perhaps because the road has been lonely for so long, I have felt I could stay by the road talking all day. However, my need for connection and for understanding must be balanced with the need for each of us to reach our hoped for destination by the end of the day, or before it gets too hot, and to continue on our way.

Perhaps we might finally snap a photo of us together, exchange important info about the road ahead for each other, some personal details – email addresses, blogs, or even a sticker for the bike – and then we’d bid each other a farewell with some supportive words.

Connections with other cyclists can be strong as there is an almost implicit understanding as to why the other is hauling themselves, and a little home, on a bike across stunning but often challenging landscapes. I’ve often felt sad that those connections are brief. They help keep me going down the road but I’d like more, I need more…

I just spent three nights at one of South America’s “casa de ciclistas”. A place that supports touring cyclists as they ride through the land. This is the first I have stayed in but I’ve heard about them many times through the conversations with the touring cyclists that I’ve met over the months.

At this casa de ciclistas in Tumbaco, just outside of Ecuador’s capital city Quito, the owners of the property repaired bikes for a living. It appeared they lived for cycling and they have opened their garden for touring cyclists to come together and camp, allowing access to basic cooking and cleaning facilities with plenty of space to relax and talk. I relaxed into that physical support, for which there was no charge but donations gratefully accepted, with some relief.

There were around a dozen other cyclists when I was there. Touring cyclists from all over the world – Colombia, Uruguay, Portugal, Indonesia, England, France – and I received deep emotional support through my needs for connection and for understanding getting met. A diverse range of souls so different and unique but deeply connected through our passion for the bicylce. My people. 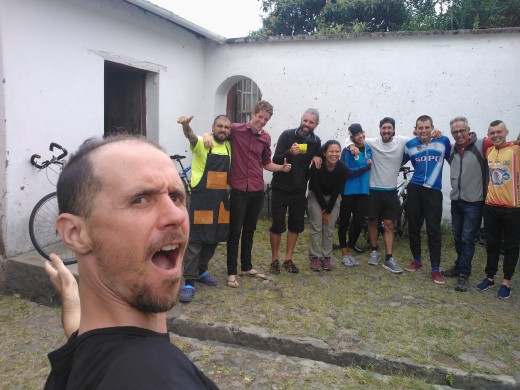 For many I met their travelling by bike was a lifestyle choice – a choice to go at one’s own pace in one’s own way. No destination, no route, just to be. Yet despite this there were clear and strong purposes for travelling – whether it was to follow artistic and creative passions (e.g. I met cyclists on a World Sketching Tour and those who made jewellery to sell and fund their travels) or to spread an important message such the importance of following your dreams (vive tus suenos).

Not only did my own Adventures in Happiness cycle to Bhutan not seem too preposterous for once as I talked about it, but I realised just how similar my own journey was to others I spoke with. In following our hearts and really stepping into being our authentic selves, we demonstrate that there are other ways to be in this world. But the road is sometimes challenging and to meet others on this road is supportive and encouraging. I ride on…