It was a New World to some, to those that were arriving. A world of vast resources, that they would use unabatedly, exploit, and try to control, on what was suddenly a truly global stage. Yet for those already there, of which there numbered, according to some estimates, more than a 100 million, it was a world in which they and their ancestors had been living in relative harmony with each other and the nature that had supported them for millennia.

As I’ve cycled my way up the Americas – from South to North – on a journey about happiness I’ve encountered many different types of people indigenously linked to this part of the world. Among others I met people high up in Andes speaking various dialects of Quechuan, the principal language of the Incas, people from the Shapibo tribe down in the jungle of the Amazon basin, Kuna people living on islands just off the coast of Panama, and those living largely confined to land set aside in the United States as their tribal homelands.

These days such people might collectively be referred to as First Peoples. Yet the term First Peoples in no way does justice to the cultural and linguistic diversity that is still present in this part of the world. For example, in South America there are presently some 350 different languages. However, it is estimated that there were an estimated 1,500 languages before people from Europe arrived.

How happy? now and then

I have found myself wondering how happy First Peoples were before the arrival of the Europeans. After all, as far as I understand it, First Peoples, ranging from those living in nomadic tribes to the civilisations of say the Incas or the Mayans, were quite possibly living with the presence of what we have come to know are the most important contributors to high happiness and well-being – comfortably fulfilling their basic physiological needs, having strong community and high levels of trust, a sense of purpose and meaning to their lives, and had nature abundantly present in their lives.

They had enough and did not want for too much more, at least not like we see in many modern societies today. Of course First Peoples also didn’t have much of the technology we now have that can help make life a bit easier and occasionally more fulfilling. Thus I’m not going to make any wild claims about First Peoples levels of happiness back then compared to many modern societies today. However, what I will claim, solely based on my experiences on this journey, is that I have little doubt that First Peoples are less happy now than they were before the Europeans first arrived.

“me and him, we’re from different, ancient tribes … now we’re both almost extinct … sometimes … you gotta stick with the ancients … old school ways.”

Back in August I met some Apaches by chance whilst I was cycling out in the hot desert. I was in the Apache Nation, and although I have now learnt it was questionable whether I should have been on their land in the first place without permission, their primary concern was for my safety out in that heat. I was OK and felt confident in what I was doing but they were kind people and wanted to help. They offered me a ride with them to the nearest village and it was an opportunity to meaningfully connect. As I sat in the back I told them a little of my story, which they were fascinated by, and I tried to find out a little about them. 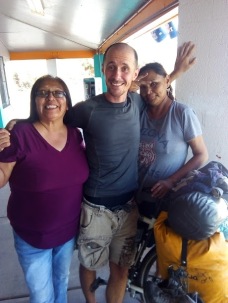 They talked of the land around them, sharing with me names of the different mountains, and where they had been born. They shared with me some Apache words, such as “yá’át’ééh” (hello), and they talked fondly of their relatives. However, perhaps the most poignant part of the journey came when we reached the San Carlos Lake that we had to circumnavigate to reach the village. There was a deep sadness about that lake. They pointed out how high the water level of the lake had once been and explained to me with some remorse how the generation of Apaches before them had sold off rights to the water from that lake to farmers in Arizona. It had given them some income but year after year the lake had shrunk.

Something important had been lost, and I sensed that it was perhaps a loss that ran deeper than the lake. They were proud to be Apaches and talked fondly of there more distant ancestors who had strongly resisted encroachment onto their territories, yet I picked up a sense of remorse of not being able to live up to their tribal heritage, and not feeling altogether too certain as to who they were as a people.

I relished the connection with them, but what was most saddening about our encounter is that as far as I could tell not one of them was sober. I had been warned previously that the Apaches like to drink.

Before I began my present journey I’d just read a book called Wild by Jay Griffiths that depicts something of the situation of different indigenous people across the world. A common thread in the book was that indigenous people often find their sense of identity through being deeply connected to the land, and that once they are stripped of that land they tend to lose a sense of who they are. Substance abuse is sadly often a way that is used to deal with such unhealable wounds. Of course there are other contributory abuses too. It might have been confirmation bias on my part but it wasn’t just the Apaches in which I came across such unhealable wounds among First Peoples.

The people that came from Europe thought themselves to be in all ways – culturally, linguistically, genetically, technologically – superior to the indigenous peoples that they found across the Americas. Indigenous people were generally thought of as inferior by people from Europe, and a vaguely inconvenient barrier to claiming the land and its resources as their own.

The Spanish relative tendency to mix with local populations stands in great contrast with Northern Europeans arriving further north. In the north there was more of an emphasis on settling on the land. This meant acquiring land from people who didn’t have any conception of private property. Europeans made claims on land that weren’t being used “productively” and tended to take control of land by taking unfair advantage of various cultural misunderstandings, and resorted to bloodshed if necessary.

The development of northern parts of America, and in particular the area that we now refer to as the United States, proceeded on being touted as a land of liberty; free of despotism of the Old World. Europeans were attracted to the “new world” through the possibility of acquiring land and having freedoms that they did not have in the “old world”. However, this notion of freedom was built upon others having their freedom severely curtailed. In reality it was a notion of liberty that only included white European men.

The First Peoples have been increasingly marginalised ever since. Within the consumer capitalist culture, that now homogenously dominates this part of the world, the First Peoples are still largely regarded as lesser. This is a great shame because the consumer capitalist culture is a largely destructive one, and one that does not appear to be bringing greater happiness and well-being that people seem to have expected it to.

If we really want to be happier then we need to go back to those basic relationships – with the self, with others, with nature – and invest in them. Much like First Peoples generally seemed to be doing before the Europeans started coming. A great deal of wisdom has been destroyed there, and we are going to have to re-learn it – probably slowly and painfully. These days many dissatisfied Westerners flock to indigenous cultures to heal psycho-social wounds that some would say have been inflicted by the dominant consumer capitalist culture. Perhaps we can salvage this. . .but there is a very long way to go. Racism towards First Peoples is rife, and there is deep anger and frustration that stretches back far into the past that will be difficult to reconcile.

The day I wrote this I happened to meet a Nehiyaw woman. Her enthusiasm for her people and her culture was infectious and inspiring. She told me about a story passed down to her by her ancestors about the past, present, and future of humanity. She spoke of the need for coming together – of all peoples – to share their unique skills with one another to avert great disaster – her voice was a strong one, it was powerful. And I listened.