Bhutan: Happiness despite the cost

Not everyone has heard of Bhutan, but for those that have there are probably two things that might come most to mind when they think of this small kingdom in the Himalayas. At least that is how it seems to me from the numerous times I have told people about my cycle pilgrimage to Bhutan.

The first is usually something to do with happiness. The other is the extraordinarily high cost of a visa.

Those attracted by the first are often put-off, sometimes evenly highly aggrieved, by the second. Yet the two are inextricably linked, because Bhutanese policymakers believe that the cost of a visa is one crucial way in which happiness is protected throughout their society. I agree.

Development in a different way

It was the 4th King of Bhutan Jigme Singye Wangchuck who created the term Gross National Happiness to signify that the type of sustainable development being pursued in Bhutan is centred not solely on developing the economy but instead on creating happy citizens. No other country in the world takes such an approach to development. That alone makes Bhutan an inspiring and attractive place to visit for many, and is the key reason why Bhutan seemed the perfect destination for my journey about happiness.

However, what makes Bhutan doubly attractive as a place to visit is that the country’s enlightened focus on happiness over the years has not only enabled the preservation of this fascinating Himalayan Buddhist culture, but kept the landscape largely untouched and heavy with vegetation. Whilst many places throughout the world have pandered near exclusively to economic interests and allowed unfettered access regardless of broader long-term consequences, the Bhutanese have been developing a model for sustainable tourism that protects their way of life.

Tourism can often have a large influence on culture and the environment. In visiting a certain place people inevitably bring with them their own ways of thinking, doing, and being. Often out of apparent economic necessity the local culture may attempt to meet the needs of tourists such that these different ways of thinking, doing, and being become indelibly imprinted on the local culture. If the tourism is unrestrained, and even encouraged solely for the sake of the economy, then the local culture that existed way before people started coming to gaze and wonder may be completely desecrated.

Bhutan is not like that. Bhutan’s model for sustainable tourism is based on limiting the number of tourists that can come to the country. Access is restricted to only those that have enough money, and at the current price this is not many people. Though it is a highly discriminatory policy, it seems to have the intended effect.

Gross National Happiness in Bhutan is underpinned by four pillars that embody the values, spiritual traditions and aesthetics of Bhutan. The four pillars are: Good governance, environmental conservation, sustainable and equitable socio-economic development, and preservation and promotion of culture. Any potential policy in Bhutan is subject to rigorous scrutiny by the Gross National Happiness Commission, which is an institution that steers national development towards promotion of happiness for all Bhutanese by ensuring all of these pillars are addressed. Bhutan’s adherence to “high value, low impact” tourism is one such policy considered crucial for the happiness of the Bhutanese – thus whilst it may not maximise total economic benefit it does ensure, for example, environmental conservation, the preservation of culture, and a more equitable and sustainable economic benefit across society.

Whilst at heart the tourism policy is one that promotes happiness in Bhutan, it has the added benefit of enriching the tourism experience. I have often struggled as a tourist. At many tourist sights I’ve found myself at there are many people, very much like me, swarming around some object trying to get as much as possible from what is before us. Then swarming around me, and the people very much like me, there are other sets of people trying to cater to our demands and desires – culinary tastes, comfortable accommodation, ease of communication, souvenirs – which often lead to an availability of things that don’t look too dissimilar from what we are used to in our own lands.

When I am at a tourist destination I often can’t clearly see what it is I thought I had come to see a lot of the time; that is, I struggle to find enough connection with what is before me to find the experience particularly immersive and joy giving. This is why I have loved travelling by bicycle these past 18 months. On a bicycle I’ve often found myself in very untypical places experiencing the culture of people, for example, staying in people’s homes and eating with their families, that don’t normally see people like me where they are. There was so much curiousness, generosity, and authenticity in these interactions that were very far removed from overtly economic and commercial interests that I’ve seen plague many parts of the world.

I had similarly wholesomely happy experiences in Bhutan. In fact, when I was in Bhutan I often felt awestruck by what was before me. At a festival I went to in Paro I watched national dances, and heard traditional songs and chants, amidst crowds of seemingly proud Bhutanese dressed in traditional clothing. With the Tiger’s Nest monastery in view I sat having a picnic in a tranquil and unblemished forest with my Bhutanese guides who, owing to their sincerity, quickly became dear friends. I had meals with local people who opened up their homes to me and showed me a little of their lives. At a farmhouse deeply laden with history that I stayed for a couple of nights I had a Bhutanese hot stone bath following a day cycling through some of the finest scenery I’ve seen on my 18 month cycling trip. I felt inspired when I went to meet with the Gross National Happiness Centre and deepened my understanding of this happiness centred culture. In all I encountered a lot of happiness in Bhutan despite the cost. 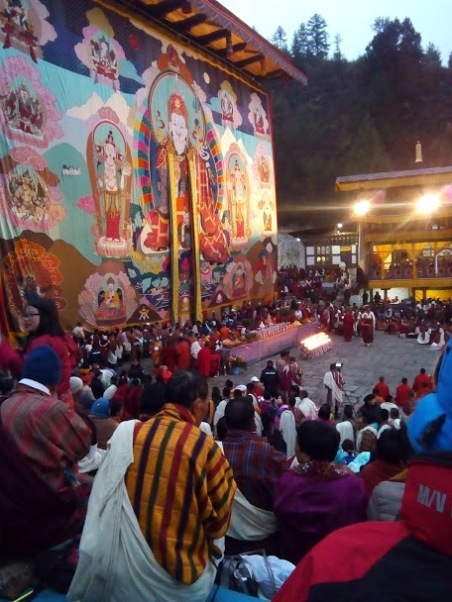 At a local festival

At the farmhouse I stayed in 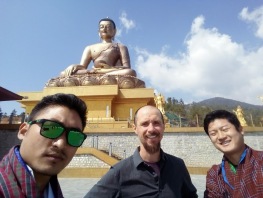 Yet Bhutan, is no Shangri-La, the mythical Himalayan utopia depicted in the fictional novel Horizon by James Hilton, as some describe it. Nor is it the happiest place on earth as people often mistakenly believe it to be. There are struggles, for example preserving culture whilst balancing migratory needs. There are inconsistencies, for example, promoting low impact travel at the local level but ultimately relying on long distance air travel. There is the unknown, for example, knowing how the rest of the world’s environmental short-sightedness will ultimately impact future generations of Bhutanese.

Bhutan is a country much like any other trying to find its way in a world where the definition of progress and success is often imposingly and rigidly defined. Fortunately, Bhutan has managed to carve out its own definition of progress based around genuinely improving the lives’ of each of its citizens. In some circles it has been inspiring discussion for decades and it was a genuine personal privilege to have experienced a little of the country after my long cycle there. Though not everyone needs to go to Bhutan, nor can they, but what we can all work towards is creating happiness inspired lands of our own – and Bhutan shows us that if the will is there then it is very possible.

***Whilst in Bhutan I travelled with Nobventure, a Bhutanese tour company. They provided me with first rate support throughout my time there, and I would highly recommend them if you were to visit Bhutan.

I also enjoyed an authentic farmhouse experience at the Paro Penlop Dawa Penjor, and I’d highly recommend that too.

***I have since written and published a book about the journey to Bhutan on a bicycle. If you like what you’ve read here then consider buying A Journey For Happiness: The Man Who Cycled to Bhutan today.